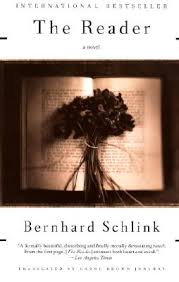 Why I Read It: Movie got nominated for several Academy and Oscar Awards in 2009. Winslet won the Best Actress Academy Award for The Reader, the film for which she has been awarded a Broadcasting Critics Association and Golden Globe  as best supporting actress.
Date Read: 04/10/11 – 05/10/11

It’s the way the narrative starts, that enthralls one; the way the novel gradually draws you in to the life of Michael Berg when he comes down with hepatitis at fiftteen. Hanna Smitchz –a woman twice his age, whom he later refers to as Frau and then Hanna again – sees him vomiting, cleans him up and helps him home. Michael recuperates and visits Hanna (with flowers) to thank her and a spark is ignited. He flees and returns with latent expectation and a romance starts – a romance that shapes and changes his life forever.
The affair does quite a number of good things for him: he learns to read because Hanna loves to be read to and he throws himself into his studies and passes his exams (to everyone’s surprise because he’d been sick for most of the school term) because he wants to please Hanna. It’s amazing how an affair so illicit was able to make and mar him at the same time so that the reader of The Reader is at once disgusted with and grateful for Hanna. When the affair ends, we are just jolted and wondering what next. Then we think, surely, Michael will survive but it isn’t really so.
I loved the way Michael spent so much time trying to convince us (sadly, I wasn’t convinced) that he doesn’t feel anything for Hanna even as he attends every single day of Hanna’s trial. He lives and eats the trial. He feels something but is unaware of it.  Obviously, he is interested in this case where Hanna is on trial for having allowed hundreds of women and children burn to death in a church during the World War 2. Her attitude doesn’t help her case and she is reluctant to defend herself. Michael realizes that she prefers her secret remains a secret. Even a quest for freedom wouldn’t let her disclose her secret.
Again, the discourse between Michael’s undemonstrative and philosophical father about dignity and protection was enlightening. It’s another part of the book I’d like to read over and over again.
Benhard Schlink has an interesting way of telling tales. The buildings on Bahnhofstrasse (Hanna’s apartment) and Michael’s home in Blumenstrasse are so vividly described the reader almost inhabits the houses. His short, simple, yet descriptive sentences make interesting scenes. The directness of the story made it easy to read. And though the plot is complicated, he is able to resolve conflicts in very natural ways.

The Reader is available on Amazon.

Chioma Iwunze-Ibiam writes prose fiction and creative non-fiction. She is the founder of creativewritingnews.com. Her first novella, Finding Love Again was published by Ankara Press. Her second novella, The Heiress' Bodyguard was shortlisted for the Saraba Manuscript Awards. She currently works as content marketer for various online businesses. You can follow her at @cwritingnws.

How To Teach A Child Creative Writing

A writing workshop is a great opportunity for budding writers to have their works subjected to peer review and critique.