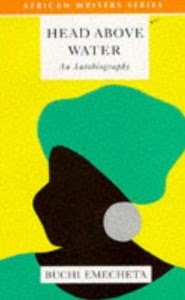 Head Above Water is the true story of a young ambitious Nigerian woman who at nineteen moves (with two wet and dripping babies) to London to join her husband. What she sees at London is more than she bargained for. The author struggles through an abusive marriage (in which her husband does a lot of unprintable things including burn up her first manuscript). The marriage ends in a divorce. And her husband denies paternity of all their kids and she is stuck in a strange land without a real job or a university degree. And so Buchi learns to grow a tough skin to keep her head above water.
It is a story of survival, of perseverance, of persistence. By some miracle, she is able to single-handedly raise five kids while studying for a sociology degree.  Even when she fails her first semester exams, she doesn’t give up on pursuing her dreams to become a writer or on her dreams of getting a university degree. And it is amazing how she manages to accomplished so much in the end.
But I think Buchi Emecheta withheld some information about her relationship with Chidi, a long-standing male friend who stood by her in a way that almost moved me to tears. When she refuses to marry him, the reader understands only a bit of it, especially because she considers her children’s interests first. But she doesn’t really talk about the real nature of the friendship with Chidi. Her reluctance to explain the relationship made her writing sound prude. Perhaps, at the time the autobiography was written, Buchi Emecheta was still trying to gain perspective of the relationship because it seemed to there was a world of possibilities that they would still get together later on in life – maybe, when the children would have grown older.
It is an inspiring story especially for budding writers who feel discouraged by rejections, failed relationships, and other challenges. Head Above Water makes the reader feel that everything is accomplishable if they persevere.
If you have ready many of Buchi Emecheta’s books, you’ll realize upon reading the foreword of the autobiography that you will be seeing a few repeats in different chapters of the book. But it feels even more rewarding to read those anecdotes in this autobiography. Buchi’s writing is refreshingly unique, witty and attention-grabbing.